the New Anzat Order recently announced that it was going to become wildly incompetent and completely fail to maintain their own borders. This popular announcement was greeted by a number of rival governments sending construction crews into NAO-controlled systems and stealing away their planets without even token opposition from the NAO who are now ranked 83rd, just below TransGalMeg, in their "galactic relevance".

Of course, despite losing almost all their territory - the NAO at least had the benefit that nobody was able to build on the planet Anzat itself, until now that is.

Of course, as the death of Isoldor proved, there is no task in the world that can't be solved with enough bribery, veiled threats and promises of future glory...so Eidola decided to "seize ownership" of a city slab on the planet of Anzat and set to work building.

The obvious discussion was deciding *what* we should build. Brigadier-General T'losk gave a short spiel advocating the construction of 400 "Wilhelm With Undersized Manhood" statues in the city, which proved unfeasible due to a lack of any artistic talent among pirates. Another idea was simply to build taverns and hotels, to profit off the planet's excellently-balanced statistics...but that gave way to a much more evil plan of invasion... 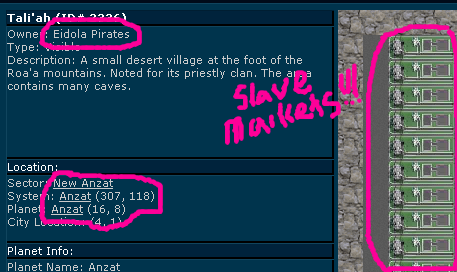 Supreme Pirate Marshal Imperium was given the task of covertly inserting the construction crews on the planet, while distracting the NAO guards with increasingly explicit messages about the nighttime actions of their female relatives. As Orphaea Imperium announced to the press, "today marks a new era in Anzat politics...one in which NAO high command will be able to purchase their beloved friends and relatives off local slave markets for reasonable prices".

Diary, I am so happy that Phase I of Operation Thundering Cameltoe is complete, with Mytaranor Slaving taking over the day-to-day operations of capturing NAO citizens on their own homeplanet, and selling them as slaves through the markets constructed by Eidola.

Now I must be going, dearest diary, my Comms panel is flashing and I believe it's the update from Supreme Donkey of the Trouser-Pod Eli Greenberg, about Stage II of his "Mission: Ironic Deaths" campaign.

Retrieved from "https://compedia.fandom.com/wiki/The_Journal_of_Teniel_Djo/Year_8_Day_339?oldid=6849"
Community content is available under CC-BY-SA unless otherwise noted.