The Jensaarai ("Hidden followers of Truth" - Sith language) is currently a Faction within the Soyak-Rainer Enterprises.

It is a Security Faction with religious tendencies toward the Jensaarai Force Tradition and will be the premiere ground defense force of the Avance Coalition.

The Jensaarai was a Force Tradition that understood that to achieve the greater good, they would need to know the Truth. But what was truth? Was upholding the Jedi Order's ideals and using the Light Side truth? Was following the Sith Tradition the way? The Jensaarai surmised that neither could be proven and that to better understand the truth of the Force and the balance, that their Force Users would need to study both aspects of the Force - both Light and Dark. Once you saw and understood these teachings you could better defend the people.

The Combine Jensaarai will take that premise and put it into a security faction with a goal to defend the free peoples of the galaxy, often-times unseen. It will be made up of Force Sensitives, Jedi, Dark Jedi and non-Force users co-existing for a common cause. It will explore the 'Gray'-side of the Force.

However, the Force isn't the only structure within the faction. It will have a heavy military-like feel and will be kin to a traditional Mandalorian clan, adept at performing almost any job.

It will be led by the Avance Coalition. Thus the company's pay scale will be that of other SRE companies. The group's neutral stance on the Force, fits perfectly within the Government's stance of neutrality in Galactic Politics.

At this time, the canon 'Cortosis Weave' is not in the game and is not a unique item for The Jensaarai.

Benethor Draygo was a Vigo in Black Sun, in the Old Republic. Upon learning he was a force sensitive he became a Jedi and was trained by Garon Kresh a Devaronian on Coruscant. Upon the Empire's Jedi purge, Kyrian Kresh (Garon's twin) and Benethor escaped annihilation by pretending to be dead for 3 days on a very bloody battlefield by using a stasis technique and Force dampening.

After their escape, Benethor went into hiding to study. That is where he finds mysterious texts written long ago by two different Force Users that introduced him of the concept of the Unifying Force, that both sides of the Force could be used for good and evil, that the Force itself was neither good nor evil, and the bearer would use it for their own means. This led Benethor down the path of the dark side of the Force in a desperate attempt to learn new powers, trusting the manuscripts to guide him. He found that he could resist its temptations and use the abilities without fear of falling into corruption.

He searched for wayward Jedi, regardless of alignment and taught them the ways of the Jensaarai, a name he derived from the Sith language meaning "Hidden followers of Truth" and he became the first Saarai-kaar ("Keeper of Truth"). Unfortunately, the relentless Dark Jedi of the Empire, the Core and the Dark Empire hunted them down and again only Benethor Draygo remained.

Many years went by. It was then when he met Navik Ikron. Navik had been presumed missing by his own faction members, but out of the blue had suddenly reappeared, claiming to have come from a near death experience after crashing into an asteroid. His adventures had led him to the planet of Vendaxa where a mysterious artifact existed that drove people mad. Navik had recovered the artifact and had brought it to the planet of Abregado-rae where it would power an entire city on a volcanic island. Benethor designated himself as the guardian of the artifact.

It was on this island that he met Jojoban Mosque who became his new apprentice. Through Benethor, Jojo learned of the Unifying Force and presented him with several trying tests. The ultimate test came with a sacrifice, much like in the Sith tradition. However, Benethor's sacrifice was for Jojo and not for himself. Benethor sacrificed himself to destroy a powerful dark jedi, to destroy the artifact and to save his apprentice. Jojo became the heir of Benethor's legacy.

Despite Benethor's sacrifice, his legacy lives on in those that he had touched. His life was not a tragedy, but a celebrated form of life that lives in us all. To achieve the greater good you must know the truth and keep the balance. Trust the Unifying Force and the Truth will be yours.

The Jensaarai embody this belief and carry on Benethor's legacy, to protect the people - no matter the cost. 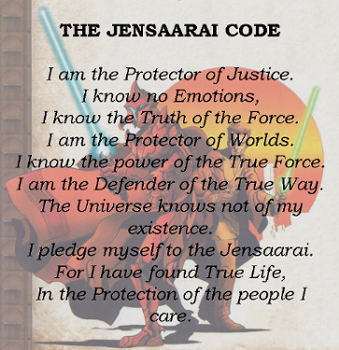 The Rank structure is a mix of traditional rank types (i.e. Sergeant, Private, etc) with other ranks that are unique and named after certain words within the Sith Language. (Saarai-kaar "Keeper of the Truth", Jen'taral "Shadow Protector" to name two) Certain ranks are for Force Sensitives, some are for non-Force Sensitives, while the rest are for everyone to obtain.

The Following is the Rank Schema:


((Note: Open to all simply means that it can be a Force Sensitive or a non-Force Sensitive and in our charter is simplified as FSI and NFSI. (non/Force Sensitive Individual). Also, Clan Ranks may be used within The Jensaarai or Centurion Arms, but Ky'bris ranks will not effect your pay.))

With the Creation of the Faction, two units were created.

Other units may be created in time, but none shall have the prestige or direct impact as the two listed above.

If interested in joining the ranks of the Jensaarai, Force user or not, send a Darkness Message to Calyxx Zion or Saudii Zion. We have many members in the Armed Forces of the world and are quite military friendly.

Retrieved from "https://compedia.fandom.com/wiki/The_Jensaarai?oldid=21364"
Community content is available under CC-BY-SA unless otherwise noted.