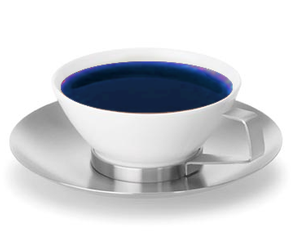 Sallichean Tea is a complex, deep blue beverage indigenous to the agricultural world of Salliche. Although not widely popular, it is available on practically any world connected to the Ag Circuit, and its long shelf life means a small supply can last a long time without going bad.

The drink was developed as an accidental byproduct of Sallichean agriculture. It is brewed from a combination of dehydrated grain husks, a variety of roots and inedible leaves, and the stalk of the preskyle flower which imparts the strong blue color.

Most people who drink Sallichean tea fall into two camps: natives of Salliche, and those who want to be noticed for their interesting beverage. The drink has little flavor and a very mild stimulant effect on most sentient species, but its eye-catching appearance and pleasant aroma make it modestly popular in places where appearances count.

There is some evidence that Sallichean tea has an unusual or pronounced stimulant effect on certain amphibian species, most notably Nautolans. There do not seem to be any dangerous side effects, nor any risk of physical addiction.

Retrieved from "https://compedia.fandom.com/wiki/Sallichean_tea?oldid=15104"
Community content is available under CC-BY-SA unless otherwise noted.