Revan Starcrasher was one of the most famous Chiss in the game.

Revan was born on Csilla 25 years ago. He father was a prominent Admiral in the Chiss Ascendancy. His mother was a beaurocrat in Chiss politics for his family. At a young age, Revan was determined to follow in his father's footsteps.

Revan joined the naval academy on Csilla when he became old enough. He spent all of his time studying, practicing, whatever it took to be the head of his class and be the best he could be. Upon graduation, Revan joined his family's phalanx. There he destinguished himself as an exceptional pilot and leader. Revan became a Commander in the phalanx.

Not long afterwards, Revan's life was turned upside down. A smuggler accidently found himself stranded on Csilla, an outlaw being chased by Imperials. The man was a Corellian named Johnathan Starcrasher. Revan confronted Johnathan, but instead of throwing the human in jail Revan listened to the man. Johnathan told Revan about the Galaxy outside Ascendancy space. Revan was instantly enthralled, he decided that he would convince the Ascendancy to play a larger role in Galactic affairs... to aid the Galaxy in the fight against the Empire. So he helped Johnathan fix his ship, then went to talk to the governing council.

Instead of helping his cause, the council decided that Revan had brought shame to the Ascendancy by helping the outsider. Revan was immediately exiled from his family so his shame would not extend to them. Revan was forced from Chiss space. Revan escaped with Johnathan to start a new life in a Galaxy he didn't even know.

After about a year, John was tragically killed and Revan lost his adoptive father. Johnathan left Revan his YT-1210, and a small amount of money. It was up to Revan to carve out his own place in the Galaxy, and make a life for himself.

Revan's first move was to look for employment. He found his first job with Slayn and Korpil. There Revan met his mentor Aidon Sadow . Revan rose through the ranks to become XO under Aidon Sadow. The two helped the company grow and expand its operations. Just as things were looking to grow, the company's owner, Jeff Knight, stepped in and turned down many of Aidon and Revan's proposals. This caused great tension between the two. Eventually this tension caused Revan to leave.

After Revan left S&K, he met with one of Aidon's friends, Andrew Panzer . After talks, Revan became a Mandalorian. He joined clan Tm'halk and MandalMotors. Revan then got rid of Johnathan's old ship, and upgraded to a YT-2000 that he made himself. There he worked until he got word from Aidon Sadow about a big development. Jeff Knight had sold Slayn and Korpil to the Falleen Federation.

Revan rejoined his friends at S&K, but this time as 3rd in Command, and Material Manager so a Falleen Federation officer could become XO. S&K's name was changed to Falleen Naval Contrats . Revan's time in the Falleen Federation had begun.

After working for awhile, Revan was then promoted and commissioned by King Bisz Aldaris. This meant that Revan had sworn his first alligience to a government outside the Ascendency. Revan took his new role seriously. He quickly rose through the ranks. He was a veteran of the war between the New Imperial Order and the Falleen Federation, and also took part in the Liberation of Tatooine by the New Republic. Revan also gained two new mentors in Zavior Davik and Landion Domic. The two confided in Revan and put their trust in him.

Revan was named XO of Falleen Resource Contracts. After a very short stay in office, he was again promoted, but this time to the Ministry of the Interior. Revan became the Secretary of Sentient Resources and worked as part of the Intel network. Just as Revan was settling into his postion, and loving everything that was going on... betral hit. Zavior Davik was uncovered plotting an assassination attempt on King Bisz. Revan felt as though he could not trust anyone, especially after he was questioned by a minister level official. Revan hopped on board his YT-2000, and left for the neutral space of the Avance Coalition.

Revan then took up employment in The Wraiths . He did not enjoy being a mercenary, so he started work with Czerka Corporation . There he met another mentor, Sorel Kaar . Sorel invited Revan to join House Valeo , a house in the Avancian Hall of Houses. There Revan rose to become one of Sorel's most trusted partners. After spending awhile in Czerka, Revan left to join The Jensaarai as part of it's leadership. While not being a Force Sensitive himself, Revan had great respect for those who were and respected its cause.

After quiet some time with The Jensaarai, Revan heard that there was a group that was trying to resurrect the Chiss people. Revan jumped aboard because it had always been a goal of his to return to his people, and to give the Chiss hope after Csilla was conquered. The new Chiss Ascendancy wanted to prove its legitimacy to the Galaxy, and to help heal the wounds of its own people and the galaxy at large. Revan took his place among his people. He became Minister of Production and Syndic of House Sabosen, Commander of the House Phalanx. Revan also began going by his Chiss name, Rrodr'eva'nliwatt, once more. Only the future can tell if they will be successful...

For unknown reasons, Revan became deeply disturbed. After failing his friends, Revan decided it was time to leave. The Chiss immediately went into the darkest regions of the Galaxy to seek solitude. The last anyone heard of the Chiss was an automatic distress call from his ship that broadcast on all frequencies. The signal was cut short as his ship was destroyed by unknown causes. Revan was onboard when the ship fell silent. No wreckage was found, and it is assumed the Chiss died a lonely man.

Revan was a personal follower of the Order of Kiyorath Dhin. His personality was usally cold and calculating when things became hectic, but he was very loyal to his friends and was known to let his walls down completely to those he trusts. He also picked up a few Corellian traits that seem to come out when things are calm. Revan was once engaged to Anjyl Seafire, but Anjyl was killed in action before wedding plans could be completed. 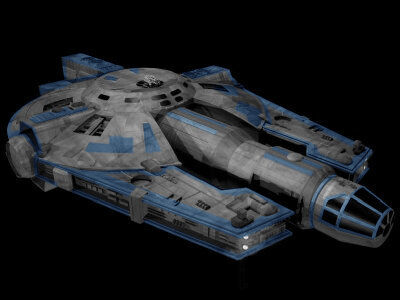 This Revan's ship. It was built by Revan during his time in MandalMotors, to his specifications. The cockpit was extended into the ship to make room for a bed. It also put all the controls on the pilot's seat, thus eliminating the need for a co-pilot. The cargo hold was modified to carry it's passengers in comfort.

Retrieved from "https://compedia.fandom.com/wiki/Revan_Starcrasher?oldid=20931"
Community content is available under CC-BY-SA unless otherwise noted.