EMPRESS TETA (GNS) - Against the backdrop of terrorist threats, voters in the Glythe Sector have begun going to the polls to determine who will represent them in galactic affairs. The sector-wide referendum, an unprecedented event in modern galactic history, is being watched with great interest by political observers across the galaxy. A massive undertaking, the referendum is expected to take as long as a month to complete. 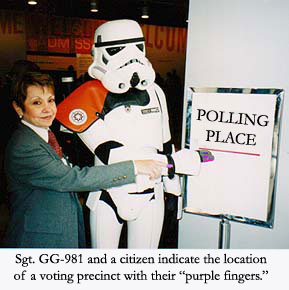 “While a speedy vote might resolve the issue quicker, all care must be taken to be as thorough and fair as possible,” commented a Ministry of Truth official during a press conference, “we must take every measure to ensure that every vote is counted correctly and safely.”

The concerns regarding safety are especially poignant given recent belligerent behavior on the part of groups within the sector. While polling has already begun in the densely populated “Green Zone” of the Empress Teta System, alien and pro-rebel groups in the outlying regions of the sector have boycotted the election and have even taken measures to suppress voter turnout in the regions under their control, going so far as to attack poling places and intimidating voters. Members of the Trade Federation, which some observers suspect to be behind this sectarian violence, have stated privately that a state of war exists between the Federation and the Galactic Empire after the Federation pulled out of trade negotiations earlier this month.

“Yes, some of you may see this is as a rather stupid move on the Trade Federation’s part,” commented Trade Federation Viceroy Bren Morgarr in a fatwa issued this week, “but the decision was made on the basis that we do not wish to lose our neutrality.” 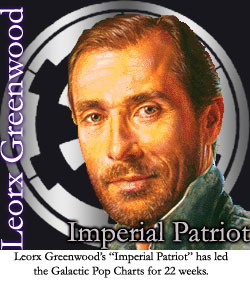 Some, like popular folk musician Leorx Greenwood, see it differently.

“I don’t see what they could be talking about with neutrality,” commented Greenwood from his tour ship at a stop in the Kuat System, “There are Rebels trying to destroy the traditional values of hard work, decency, and humanity this galaxy was built on and pirates stealing the life’s savings of hard working people. With things the way they are, you either support the Emperor or you’re with the terrorists. There’s no middle ground between good and evil.”

Greenwood, who was a former alazhi farmer on Thyferra before making it big with his special brand of patriotic folk music, is touring in support of his smash album “Imperial Patriot,” which has sat atop the Galactic Pop Charts for 22 weeks, thanks to the strength of the hit single “Proud to be an Imperial.” Greenwood said he planned to play a special concert on Empress Teta to honor the bravery of the citizens there and the increasing numbers of Imperial military personnel deploying to the sector. “We all need to take the words ‘support our troops’ more seriously,” the musician said, “Freedom isn’t free, after all.” 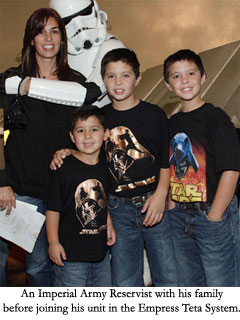 Indeed, since the threat of a Trade Federation intifada has risen, Imperial military presence in the Sector has begun to increase drastically. From across the Empire, reserve units have been activated and deployed to Glythe, leaving many worried but determined families behind in communities from Coruscant to Khiumin.

“Of course I’ll worry,” commented Danna Torivix as her husband, a Sergeant in the Imperial Army Reserve, boarded a transport bound for Empress Teta, “but we all believe in what he’s doing. Sometimes, we take it for granted how great we have things here in the Empire. Those people in the Glythe Sector are fighting for their freedom, and we are all proud of our brave soldiers over there.”

Retrieved from "https://compedia.fandom.com/wiki/Referendums_Underway_in_the_Glythe_Sector;_Trade_Federation_Vows_Violence?oldid=10835"
Community content is available under CC-BY-SA unless otherwise noted.