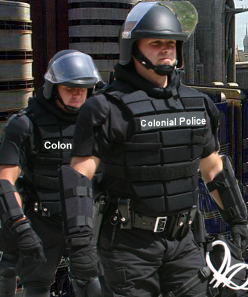 CORUSCANT (GNS) – The launch of the Imperial Colonial Police, the Empire's new pan-Empire police force, appeared to go successfully this week as the force's flagship operation resulted in between 75 and 100 arrests on Coruscant (pictured, Officers and units from the Imperial Colonial Police (Coruscant Division) 37TH Precinct, Senate District) Police Commissioner Crog, the retired Naval Admiral, had intended to hit the ground running when his force was launched by instigating a crackdown in

vagrancy and petty crime on the Empire's capital. Officers made arrests across the whole planet, and after Pro-Consul Zee Wolf ordered that there should be no automatic executions, prisoner-handling assistance was provided by Crog's old comrades in the Imperial Third Fleet.

"We’ve cleaned up the planet," announced Crog proudly, "in more ways than one. After Rebels and other undesirables heard about our new tough line, starships started turning up from across the Galaxy to pull them out of Coruscant before we began our raids. They did half the work for us! Those individuals detained in custody now have a few weeks to prove that they are in gainful, active employment or else they will need to be dealt with."

Critics had expressed concern that the police would be unnecessarily heavy-handed on Coruscant, pillorying Crog as the 'Sheriff of Coruscant' and making comparisons with the notorious Kashyyyk incident last year.

"We are pleased to demonstrate that such criticism was, of course, complete nonsense," stated the Police Commissioner, however sources indicate that at least one individual 'of interest to DII' was located on Coruscant and immediately liquidated.

It is expected that if results such as this continue, the Office of the Pro-Consul will approve the expansion of ICP.

"I’m very happy that street crime, begging and vagrancy no longer litter the streets," smiled Pro-Consul Zee Wolf, meeting reporters on his way to the Palace. "A robust defence of safe community living, enforced reduction of crime and the preservation of good order. A fine example of the new society the Empire is trying to create."

Imperial Colonial Police issued a press statement stating that any and all foreign visitors to Coruscant should be aware that while on the planetary surface they will need to keep an eye out for attempted contact by ICP. Failure to respond to any contact by Police Officers and provision of full details and reasons for being on the planet may result in their arrest.

This article was authorised by the Ministry of Truth. The Ministry is, as you might expect, not an equal opportunities employer.

Retrieved from "https://compedia.fandom.com/wiki/Police_Crackdown_%22A_Success%22,_Says_Commissioner?oldid=14866"
Community content is available under CC-BY-SA unless otherwise noted.