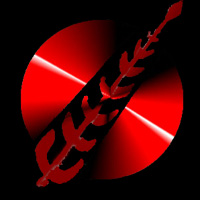 ***The viewscreen before you flickers from its nonsensical adverts to a moment of electronic noise. The snowstorm dissipates quickly, revealing a symbol denoting honor and power; it demands loyalty from its subjects and earns respect from the masses. It is a red disk with a leaf piercing the center. A shadowy image forms in the center of the screen, denoting a presence of some humanoid form. It congeals to reveal a male wearing full combat armor. The man leans forward so that his face fully appears, and you can see the numerous scars and burns that are proudly worn by him, the most prominent being a huge scar running down the left side of his face. Across the bottom of your screen, a name in Aurabesh. It scrolls to the left and is translated in as many different languages as there is time to display. Warrior Eminence Tyr DeMeer. As Tyr DeMeer speaks, his words are displayed in six regional languages: three on his left, three on his right.*** 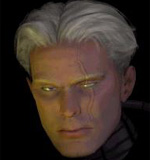 "Inhabitants, it is with mixed feelings that I inform you that a traitor in our midst has been cleansed."

***His voice is thick with venom, but those familiar with the inflections note that there is also a greater sense of pride.***

"A Twi'lek known as Sage Kun has been purged of his life, forever to walk the Shadowlands in shame. His exiled corpse was left behind the ion trail of his executioner, Lieutenant Duar Bracer.

Kun had been a member of our stellar Transportation Fleet before his attempted infochant scam. The current head of that operation, Lieutenant Vandar Nijed, had learned of his subordinate's treachery from a tip beyond Mandalore's realm of control. This tip led Lieutenant Nijed on a fact-finding mission, including ship logs, communications, recordings, and a curious mishap where Kun himself was left to die on a distant planet.

It has taken some time for Lieutenant Nijed to locate the attempted sellsecret, at which time he contacted the leading members of Mandalore. I was contacted directly and asked to handle the situation, so I dispatched my finest training officer, Lieutenant Duar Bracer. He took on this mission as a sense of duty and loyalty, proving that even if the system makes mistakes, the Mandalore steps up and solves it on their own in the only way necessary. Lieutenant Bracer took time out of his busy schedule to rectify the situation. In a matter of hours I was contacted personally and assured that this runi was properly dispatched."

Retrieved from "https://compedia.fandom.com/wiki/Mandalore_eliminates_traitor_-_Year_7_Day_254?oldid=10795"
Community content is available under CC-BY-SA unless otherwise noted.