Kyp was abandoned by his parents when he was 3 and left to die on the streets of Alderaan, fortunately he was found by a trader named Dack Wise. Dack took Kyp to his ship, a YT-1210 Wiseone, and trained him and when Kyp turned 14 Kyp began to help Dack with his work as a trader.

When Kyp was 26 years old Dack died and Kyp was left on his own so he decided to join the Rebel Alliance , he quickly found out it sucked so he defected to the Empire. Kyp enrolled in the Imperial Academy, then graduated when he was 27.

After graduating the Academy Kyp became a Private in the second legion of the Imperial Army also known as the "Hellhounds". Several Months later he was promoted to Private First Class. a few months after that Kyp decided to quit the Empire and join Cortar Medical but before he could do that he was arrested by Major General Dale Chambers for "defecting". 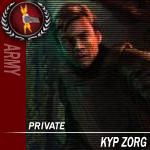 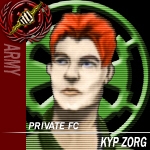 Retrieved from "https://compedia.fandom.com/wiki/Kyp_Zorg?oldid=14255"
Community content is available under CC-BY-SA unless otherwise noted.