Born in the city of Tyrena to Lianna and Wilhelm Du'Monte, Kara and Samuel, her twin brother had a fairly normal and well adjusted early childhood. With their father usually deployed somewhere and their mother left to care for the twins, the pair spent a large amount of time around the family business, a small repairing service operating from the city spaceport landing pads. While Samuel discovered the innate talent for destruction rather than maintenance, Kara turned out to be the exact opposite ; through spending time around the business, Kara learned the tools of the trade with ready enthusiasm, taking the oppertunity to spend as much time as she could with both her mother and the inner workings of starships.

Kara rarely managed to see her father however, due to his position in the Imperial navy as the Commander of a squadron. Wilhelm usually found himself deployed in the field, onboard an Imperial Star Destroyer or some other flagship, removing the oppertunity to see her father on a regular basis.

While her life was far from perfect due to her family's differing opinions, Kara grew up with a relatively easy life on the streets of Corellia. By the time she was sxteen, she had already picked up the intricasies of working on starships as a mechanic and had taken an active hand in the family business, leaving her with a fair amount of knowledge regarding the inner workings of machines. Despite being a fairly succesful mechanic, she wasn't content with her lot in life and had never hidden her desire to take to the stars as a pilot. Ever since she had been a small child, she had the lust to wander, to explore and travel through space.

On the rare occasions that she did come face to face with her father, ideals would usually clash. While not openly rebellious, Kara never ran out of questions on why the Empire treated it's non-human population so poorly or the many unpopular policies that it chose to enact. The two often clashed on from different ideologiy standpoints. While the two often did disagree, Kara shared her father's love of flying and space, leading to her eventual enrolement with Corsec (after a great deal of argument on why Corsec and not the Imperial academy) with her father's grudging blessing.

On her eighteenth birthday, she finally left home and set off to enroll in the Corsec Academy on-planet. 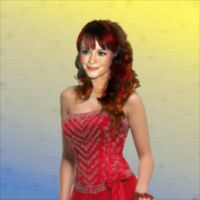 The Academy and Corsec Edit

While life at the Academy had been as she had expected, Kara had quickly discovered that the Imperial sponsored organisation's ideals and her own clashed on some very basic levels. Despite this setback, she learned to bite her tongue where it was needed and just focus her efforts on graduating from the Academy and straight into flight status. Friends were few and far between as the competitive nature of the aspiring pilots began to shine through , leaving the cadets locked in an ever increasing battle for that top grade in the class.

Life at the Academy gradually grew to be harder, as an ever increasing workload was put on the cadets shoulders. Combining the extra responsibility along with the fact that she had never fit in and struggled to keep her opinions in check. As a result of the ever-mounting pressure, her scores eventually began to fall to the point where she might be in danger of washing out from the academy altogether.

It was during this difficult time that Kara was approached by one of the senior instructors, Cort Annad, with an offer to help repair her grades at a cost ; She would help him steal some of the hardware from the academy and in exchange, she would graduate. After some thought on the matter, she declined and Annad attempted to force the issue, moving to threaten her and her family if she turned the offer down and revealed it.

She was able to escape from the brief encounter after delivering a swift knee to the instructors crotch, allowing her to eventually escape from the encounter. As a result of the 'meeting' , she was brought up on charges of gross insubordnation and striking a superior officer, of which the outcome was dismissal from the Academy.

Now directionless, Kara eventually returned home to face an argument over what had happened and what she was going to do, eventually culminating in Kara leaving home after heated words were exchanged between her parents and herself.

After the realisation that life on Corellia was quickly leading nowhere, Kara set out on foot towards the nearest city spaceport. An exile of sorts, she spent a good few weeks wandering towards her destination without a goal, save for the desire to get off Corellia. Her journey towards the spaceport had succeeded in one aspect though, it had calmed her from the emotional state she had been in on leaving home for the last time for the forseeable future.

As a result of the flight from the planet, she was put into contact with some liason officers from the New Republic and in the only act of defiance open to her, she enlisted in the Republic Academy.

This time, she graduated and now serves in Starfighter Command as a Lieutenant

More of an update to come on the New Republic front later.

Retrieved from "https://compedia.fandom.com/wiki/Kara_DuMonte?oldid=19166"
Community content is available under CC-BY-SA unless otherwise noted.