Inara Imperium was born within the Hapes Cluster Year -18 Day 160. Athough her original plans were to join the Hapan armed forces, her brother, Orphaea Imperium, asked her to join the Galactic Empire. Since she had very little family, she chose to follow him. 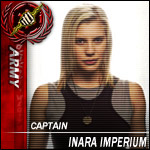 Y11D0 Removed as CO of the 1st Imperial Legion

Inara signed up for the Imperial Navy and served in the 4th Fleet under LTCMDR Igneus Esh for 18 months, through most of her enlisted career, until he retired. Noting that her career was going to change with a new CO, she heeded the call of the Navy Commanding Officer that the Imperial Army was short of staff and offered to transfer. She was deployed to the 1st Imperial Legion and served under MAJ Ralkata Tyrran for just under 6 months. It was during this time Inara was admitted to the School of Officer and Command Studies (SOCS) and after an arduous amount of training received her commission in the Imperial Army. Soon after this, she became XO and then CO of the 1st Imperial Legion. Inara commanded the Legion for just under a year, through several missions, most notable the Bastion Project, Operation Mad Hatter and Operation Consolidation. The Legion was marked as the unit with the fastest reaction time within the Imperial Defence Force and commended by the Ministers and Moffs they were ordered to serve and defend.

Unfortunately, as tends to happen to all good things, the "good times" came to an end. The Army CO, Inara's commanding officer during this time, BGEN Bacara Kex, stepped dow. His replacement was COL Graeda L'Annan. It was her decision to drive the Army in new directions, for better or worse, she chose to change the process of command in the Army and wished to replace Inara as leader of the 1st legion. After a lengthy and exclusive service within the Empire, Inara found herself expelled and alone.

Her family is one that ebbs and flows throughout the galaxy. As a byproduct of an abandoned cloning experiment, its hard to tell exactly how many Imperiums might be in the galaxy. To date 6 Imperiums have been uncovered: Actrial, Artemis, Melkhior, Inara, Orphaea and Cyrus Minx.

Inara was a regular patron of the Imperial Dojo and the less formal Karon's Slaughterhouse. Almost daily she could be spotted testing her skills against the droids or more frequently Jason Con, Riles Cole (dec.) or Karon Alfan (dec.). It was here that she met her future husband, Lord Draith Shadux. He often refereed the sparring matches and ended them if became excessively dangerous.

Inara Imperium was married to Draith Shadux on Y10 D218 on Selonia. Her brother, Orphaea Imperium, wallked her down the aisle and the couples closest friends witnessed their union.

Inara gave birth to a son, Lucian, after Draith and her became estranged. Her fiancee, Alexander von Ismay, offered to adopt her son, but when the relationship failed, Inara decided to raise Lucian on her own. Lucian is her one weakness, often bringing out her softer side. Kept on the Excelsis Deo, Inara hires the best nannys and help to care for him while she is on duty.

Retrieved from "https://compedia.fandom.com/wiki/Inara_Imperium?oldid=20160"
Community content is available under CC-BY-SA unless otherwise noted.