Ladies and Gentlemen, I come before you tonight on one of the more somber occasions in our galaxy’s history, particularly for those associated with the New Anzat Order. As you all know, a group of deranged and possibly dangerous sentients has made statements on the GNS to the effect of proclaiming their worship of Ewoks, fuzzy creatures native to the sanctuary moon of Endor. 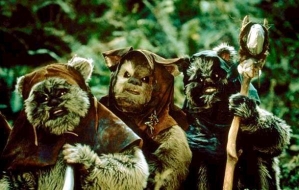 Sources placed within this religious sect, known as the Order of Kampar, have relayed to us information suggesting that Galaxy Elitist....

Wilhelm von Ismay of the New Anzat Order has funneled hundreds of millions of credits into this sect, even going so far as to adopt the religion himself. Recordings of New Anzat Order High Command meetings suggest that the Order of Kampar is well on its way to becoming a state-sponsored religion.

What’s more, elements of the New Anzat Order fleet have been dispatched to Endor, with orders to retrieve Ewoks to be used for Wilhelm von Ismay’s “personal use”. Ironic though it is, Galactic Tabloid Publications suggests that perhaps if the Galactic Empire were to step in, this situation could be immediately resolved, and the Ewoks could be saved from the brink of extinction.

Retrieved from "https://compedia.fandom.com/wiki/Elitist_Joins_New_Religion?oldid=10655"
Community content is available under CC-BY-SA unless otherwise noted.