Once upon a time, there was a fool named Krythan Rogers - now he wasn't your ordinary run-of-the-mill fool, he was a very special fool in that he actually believed himself to be a great trickster. He started off as a petty criminal in the ill-fated Cerberus corporation, but after trying to form a coup against the leader, he was kicked out, and left penniless, destitute, without any skills or experience, which led him to the predictable next job... 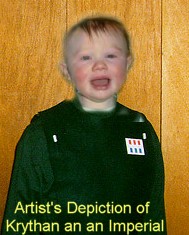 He joined Vodo's Imperial Remnant break-off and fought in vain for a promotion, claiming that he was helping to fight the threat of Eidola Pirates in the few remaining Imperial sectors of space. Of course, it was a transparent lie since the pirates continued their constant flights and raids throughout the galaxy, and he never really managed to advance very far. He then foolishly "told the leader to go screw a Hutt", and likely would have been immediately killed by the Remnant had they not been even more incompetent than he was, so he quickly fled his commission and continued his life... 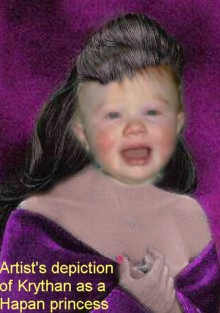 His next stop was Hapes, where he was assigned to a Naval commander's fleet. Unfortunately, he again decided that discretion or intelligence were not his forte, and so began berating his superiors constantly, complaining that nobody treated him with any respect, so they should all go **** their ******ing piece of *******y ***ers, before he ******ed their ***ing ***** of ******** with his ****ing ****. Ill-received, he became the target of the Hapan admiralty who were unable to track him down, as he again joined another faction desperate to overlook his past and hire another bullet-catcher. 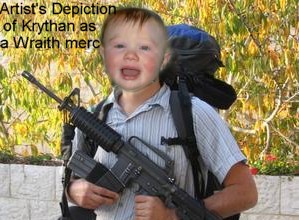 The Wraiths were his shortest term of employment, since he almost immediately decided to showcase his lack of inner cranial matter, and tried to steal a Carrack Cruiser. It would have been a glorious theft...if only he hadn't failed miserably, and been forced to flee for his life.

At this point Eidola became aware of Krythan's continuing reign of nincampoopery and failed attempts at derring-doo. A quick scan of the holonet indicated that the Wraiths had actually dispatched a Jedi Knight, Legatus Avid Soyak to try and bring Krythan's sorry whiny hindquarters to trial. The pirates wasted no time in arranging a battleship to be dispatched to Krythan's suspected location with a full raiding party aboard. The Gráinne Ni Mháille had a new prisoner. At first Krythan pleaded with his captors to release him, promising that his friends would pay millions for his safe release - though he later admitted he had no friends, and the few people he did ask, refused to pay a decicred for his life. Poor Krythan.

Although they were offered large sums of money if they returned Krythan to face trial, Eidola reiterated that they were not bounty hunters, nor did they respect the government forces across the galaxy. They were pirates, and that meant that a pathetic wannabe like Krythan would face pirate justice. The Galactic News Censors won't allow our gratuitous explanation of his final fate, but suffice to say that it involved a very sharp knife, reverse power coupling, three kilograms of Alazhi, the hilt of Derek Shado's personal sword, eight ropes of varying lengths, an open fire, two tauntaun fetuses and a surprising amount of sadistic pleasure.

So once again, what others have failed to do...Eidola accomplished with less than 48 hours of planning.

Retrieved from "https://compedia.fandom.com/wiki/Eidola_writes_a_short_biography_about_the_man_they_just_killed._-_Year_7_Day_224?oldid=9155"
Community content is available under CC-BY-SA unless otherwise noted.