Rumor suggests that the Eidola pirates learned about the Imperial Remnant's attempted blockade of the Trade Federation planet Varn very recently, after Coruscani citizens were heard grumbling about where their tax credits were being spent. It seems that the blockade has actually affected the citizens of Coruscant and the Empire, more than the citizens of Varn, who as of this afternoon were still unaware there was even Imperial interest in their system, muchless a blockade. In the words of local citizen Jado Dur'rik, he was not even aware there was a blockade of the system.

Preliminary reports suggest that the blockade's fighter complement is composed of a squadron of dupes above the planet itself doing a fine job, a squadron of squints who were simply racing around the western perimeter of the system aimlessly the entire day, and two squadrons of eyeballs...well, that *was* the complement. I suppose it would be more accurate now to announce that 25% of the ships have been captured by Eidola, after a certain Stormtrooper named "Peter Ducky" decided to foolishly order his men to dock their TIEs aboard the wrong capital ship...the Gráinne Ni Mháille. Rumors suggest he had been lured aboard the ship by sexy comm-messages he had "accidentally" stumbled across earlier between Eidola sultresses Jessica Hyde and Teniel Djo.

Why exactly, the Imperial Navy had deigned to assign a stormtrooper to pilot a squadron of TIEs is confusing at best. But while Imperial incompetence still results in constant Eidola victories, they should still be applauded for their ever-quickening response time to disaster. Today, within several minutes of Ducky's boarding the ship curiously looking for the sexy pillowfights and slumber parties he expected within, both Admiral Slicer and Pro-Consul Zee Wolf messaged Eidola representatives demanding to know what had happened to a quarter of their fighters involved in the Varn blockade.

As was explained to the Remnant Forces Varn commander, Admiral Slicer, the captured TIE Fighters are currently being held in Eidola's Lost & Found Department, under the care of Eidola Chief Justice Overlord of All Things Awesome, Adam Zad. The ships can be claimed by any representative of the Remnant Navy holding a rank of C-4 or higher, from Eidola's Headquarters on Sevarcos. If the 12 TIE Fighters are not claimed within two weeks, Eidola will seize them to pay handling and storage fees.

While 11 of the pilots were instantly killed, squadron leader Peter Ducky's fate however, was a small cause for celebration. Given that he was a fairly new member of the Imperial Remnant's forces, Eidola's tribal council of elders ruled that he was guilty only of poor judgment, teenage hormones, and of course, stupidity. Mistress and Commander Jessica Hyde met with Teniel Djo, and together they put the question to Ducky of how best he should be given an eternal reminder that Eidola had been merciful allowing him to keep his life. When the question of autographed postcards had been discarded, it was decided that he should be allowed to choose his punishment, and within the hour Ducky had forfeited his limbs, in exchange for his life. The following was submit as proof of the action. 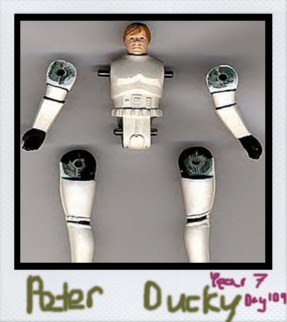 So in closing, Eidola has broken the Imperial blockade of Varn to actually capture a quarter of their fighters, and the Imperial stormtrooper Peter Ducky has been marooned in the nearby system of Vinsoth. Whether the Remnant will be able to rescue their stranded pilot before Trade Federation officials, or vengeful locals, find him remains to be seen.

In closing, we issue the following plea 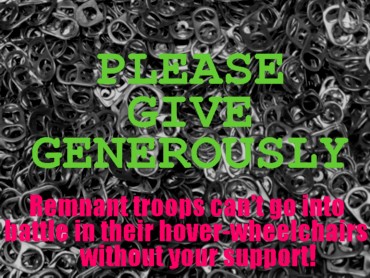 Retrieved from "https://compedia.fandom.com/wiki/Eidola_Captures_12_Imperial_TIE_Fighters...and_Their_Pilots!?oldid=10649"
Community content is available under CC-BY-SA unless otherwise noted.