Trandosha, Kashyyyk, Echo was born to a middle class family, living amidst a militaristic time. With a centralized and ancient government, dating back millennia, at a power struggle with The 12 Colonies, the push for militia increased every day. The rivalry between Trandoshans and Wookiees at a stand still, as they united to rebel against the tyrannical rule of TTC. Before Echo was born, however, his two brothers had already enlisted with the local militia, and his sister was set to marry Lord Drachnun, who later fled when he chose life over honor. When Echo hit the age of 15 years, Echo joined the militia, along side his last brother, the last was killed when shrapnel from an ion cannon shot impailed him, in Trandora, Trandoshas capitol city. Echo served along side his General, the 5 last remaining Officers of the 122nd Assault Squadron, one of which his brother, for close to 3 years, making small headway against the TTC control. Eventually, their efforts were lost and those who opposed TTC were slaughtered. Seeking shelter, and a new home, hoping to return with vengeance, thousands of trandoshans were emergency transported to far reaches of the galaxy, seeking shelter. Echo was aboard the last shuttle that left, the YT-2000 122nd Guardship was the vessel. His older brother, Echo believes, went with the shuttle before his to Naboo, although, no communication has been returned from my attempts of contacting him. His sister stayed behind to care for those wounded, to his knowledge is still alive, as no medical reports have been broadcasted.

After arriving in Falleen Prime, Echo helped build up living areas, shops, and hospitals, in an attempt to build some sort of commerce and stabilize his people once more. The Falleen living in the area were more than helpful in assisting them, and lent tools, time, and man power to finish the jobs quickly. Post completion, Echo met a General of the Falleen Federation Marine Division, had a few drinks with him, talked about TTC and the effect of neighboring systems. Later Echo was approached by another high ranking officer from Falleen Federation, Lieutenant Tyler Davik, who later convinced Echo to Join the Navy of Falleen Federation.

After his completion of Academy training under Michael MaCleod, Echo climbed the ranks over a period of 16 months, during which time retaining the rank of Captain. Echo led the Department of Education as Dean, Department of Diplomacy as Royal Ambassador, FIB Intel, Academy Instructor, Ministerial Attached of MoD, and working on major tax planets builds. During this time, Echo was also a part of the Operation led by the New Republic to take the power from TTC from his beloved homeworld, Trandosha. Fulfilling to say the least to again know his home was free, and in good hands, he visited on occasion, helping rebuild what had been lost. He swore his life to protect his King, Bisz Aldaris, when he reached the rank of Lieutenant.

Although he felt he should remain with the Federation, Echo knew there was more for him, a greater calling. After a successful career in FF, Echo decided his time had come to an end with FF. He parted ways, having no hard feelings. Year 9 Day 61 Echo left Falleen Federation, hopefully leaving behind a mark of dedication, shown by his comrades as well. 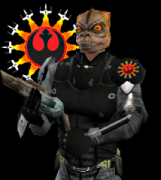 Echo then joined Command under the Rogue Squadron. He has since recycled the beloved YT-2000, 122nd Guardship and constructed the CR-90 Assassin-class Corvette, 122nd Pride of Kiyorath from the very parts and materials of the Guardship that saved so many. Within the RS, Echo helped stabilize the recruitment process, expedite Fleet maneuvers, along with general Embassy responsibilities. It was during this time, the Aj'Salans Nathran, Treemare Daywalker called upon him. Echo was accepted into AS around the same time that he had joined the federation. Aj'salan was one of the first Royal Clans of Falleen Federation. Being one of the few remaining, it was an honor to be accepted into the ranks. Even through the early days in the Federation, Echo was active within the structure of the clan.

With Aj'Salan slowly regrowing, the time had come to form the church for which it and the other Noble Clans have worshipped under. Soon thereafter, Order of Kiyorath Dhin was publicly formed, lead by Nathran Daywalker, and Echo as Master Templar.

With the ever increasing demand for senients to come in contact with their own group, Echo took the initiative to form the T'doshok Alliance, a society for Trandoshans. Although the membership is confidential due to members being part of the Galactic Alliance(GA) and some from Impirial Union(IU), many Doshans are in contact with their brethren. The services that are provided are expansive, ranging from ships to stations. And to many Trandoshans around the galaxy, TA has helped them gain a better footing the galaxy.

Retrieved from "https://compedia.fandom.com/wiki/Echo_Rantae?oldid=20211"
Community content is available under CC-BY-SA unless otherwise noted.