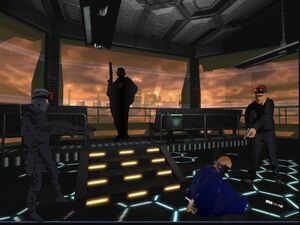 When Isoldor Storm's ship was searched from top to bottom, there was a room containing trophies from those who he had killed. There were some mutilated bodies that could not be identified, but here is a list of the identified bodies.

And the ear of Jesfa Ackmin was found on Isoldor's person, clenched tightly in his hand as if he was waiting for the day to get that other ear.

If any of these names ring a bell, contact The Eidola Pirates and arrange a delivery of the remnants to the family, friends, and/or organization that were close to these individuals.

Year 8 Day 335, 9:41 : Message from Anonymous to Lance Hawke
You might be a treacherous pirate low-life, but you've done the entire Galaxy a favor in offing that even-lower-life Isoldor Storm. Every once in a while there's an act of unmitigated evil that even the good guys kinda enjoy, and a Eidolon killing a Sith is one of them.
So thanks.

Retrieved from "https://compedia.fandom.com/wiki/Death_of_Isoldor_Storm?oldid=11199"
Community content is available under CC-BY-SA unless otherwise noted.