Coral Jalin Dayton, son of retired Vice Admiral Jalin Colyn Dayton, is the current Deputy Director of the Imperial Security Bureau within COMPNOR and the New Imperial Order. Entering service within the Galactic Empire, Dayton would eventually depart after the betrayal of Emperor Charon at the hands of his Executor and the Sith Lord pulling at the reigns. Departing the Empire, he eventually fell in line with other former Imperials, eventually ending up with other Charonists within the New Imperial Order close to 4 years after the 'Exodus'.

Life on Corellia in a pro-Imperial household.

At the age of 9, Rachel Jocelyn Dayton passes away from a rare form of cancer.

Close to 16 years after his mother's death, Dayton's life is turned upside down as feelings of abandonment finally wrek havoc upon him as his father has been exceedingly absent in his life since his mother passed away. Finally getting into a massive arguement with his father, Dayton turns to the Empire and enlists to join the Imperial Academy to become a TIE pilot.

The beginning of service, fealty and fidelity.

Dayton receives news in the beginning of his second year at the Academy that his father has died in a shuttle explosion over Commenor. This shoves him down a dark path, nearly getting tossed out of the Academy.

Coming to a realisation that he couldn't mar the family name any longer, Dayton pushes through the agony of everything that has happened in his life to graduate from the Imperial Academy with near perfect scores.

Colyn, Dayton's younger brother, kills himself on Corellia after a long horrid ordeal involving his girlfriend and a pregnancy scare. Caused in part by her family, Colyn takes his life. Dayton returns to Corellia fresh out of the Academy to take care of family affairs and bury the only other surviving Dayton on Corellia.

Reporting in with the 3rd Naval Fleet, otherwise known as the Kuat Naval Guard, Dayton begins his service as a TIE pilot within the Imperial Navy.

Dayton watches as the Empire that has welcomed him with open arms is betrayed and shadowy figures begin to manipulate the strings as corruption slowly begins to take hold as the Exodus begins.

Dayton attempts to change his outlook on life after meeting a woman by entering into the training pipeline for Imperial Intelligence.

Dayton makes a threat against the Deputy Director of the Imperial Security Bureau as he flees for his life. Getting in contact with the Rebel Alliance, he attempts to take his feelings of betrayal to another level, attempting to join the enemies of the Empire as a means to an end. He is 'debriefed' by CRI, at which they declare him 'persona non grata' due to incorrect intelligence that he was an II operative seeking to infiltrate the Alliance.

Catching Up With Old FriendsEdit

Joining the Jedi Praxium, Dayton rendezvous with various Charonists and ironically works closely with the Rebel Alliance. Dayton joins the 2nd Praxium Defence Fleet before transitioning into an Intelligence aspect within the Praxium.

Dayton is approached by a conglomerate known as KinerCorp.

An Offer You Can't RefuseEdit

Dayton is brought onboard Intellifish (later renamed to the Corellian Engineering Corporation) as a part of the Merchant Marines. Becoming under the employ of Marquis de Seele, Dayton becomes a ranking member within the Special Operations section of CEC.

After the departure of Seele, and other members of the Director's Board of CEC, KinerCorp leadership appoints Dayton as the Chief Executive Officer of CEC. Coming into contracts with the Empire, plans are put in motion for the future.

After leading CEC for 6 months, Dayton takes his leave, allowing KinerCorp to select another to lead CEC. He returns back to his family's estate upon Corellia which has been kept up by the multiple trusts set up for himself and his brothers.

Dayton realises that he can't keep himself out of the game for too long, and prepares to return back to gainful employment.

Dayton learns of the creation of the New Imperial Order, and pledges himself to the New Order and the goals of the newly formed Imperial separtist group.

Dayton begins service within the New Imperial Navy as a starfighter pilot.

Within months of returning to his old life as a starfighter pilot, Dayton could see that the face of Imperialism has changed within the Galaxy. The old ways, forgotten by the majority of Imperials, were on the way out. Remembering the glory days of the Empire at the end of Emperor Charon's reign, Dayton begins debating ways to safeguard the old ways. Finally coming to a decision to apply to the Imperial Security Bureau within COMPNOR, Dayton accepts a position as the Chief of Enforcement, and with it the rank of ISB-Major. His work starts immediately and he goes about defending the New Order, moulding and shaping the new generation of Imperials to achieve the goals of re-integration within the Galactic Empire without a tyranical ruler upon it's throne.

How Do You Cheat a Corellian In Sabbac? You Don'tEdit

Dayton rolls with the punches within the New Imperial Order.

Dayton is appointed the Deputy Director of the Imperial Security Bureau.

Wait - You've Never Sent Explosives-Laden Gundarks In To Blow Up a Building?Edit

Dayton begins to make various runs within the Galaxy outside of his duties within the NIO.

Dayton finds himself on Hudriel, a New Republic aligned world due to ship problems. He is directed to a bar named "Helljumpers" in which he seeks out a stiff drink. There, Dayton finds himself confronted by a pissant Jedi and various Rebel personnel. A woman attempts to intervene to allow Dayton to depart peacefully, but the situation spirals out of control, in which the Jedi injures Dayton after he takes the woman hostage before escaping.

Dayton races to evade forces sent to find him, before having a series of interactions that sets the stage for things to come.

Blaster In One Hand, Deathsticks In The OtherEdit

So This Is What a Welcome Is?Edit

A subtle welcome turns into something much more...

Dayton takes a well deserved vacation to Naboo, and runs into somebody familiar as gears continue to turn...

A trip to Ord Anzat brings Dayton close to the nose of the dragon...

Turning over a new rock...

A mixture of blood and whiskey can stain tiles, no joke.

If a Picture is Worth a Thousand Words, Scars are InfiniteEdit

Dayton returns to Hudriel at the request of Adri`ana Salvatore and things start looking up...

An important life decision made, Dayton embarks upon a new path in his life.

This is where text is going to be going. 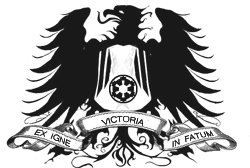 And here. Layout time, break it down.

Retrieved from "https://compedia.fandom.com/wiki/Coral_Dayton?oldid=18924"
Community content is available under CC-BY-SA unless otherwise noted.