“This is Feb‘ju Hartara with a Wraith News Network bulletin. Recent updates of a conspiracy inside the ranks of the Mercenary warrior group have come to an end. With a special conference held today onboard the Sabaoth Destroyer Nihil above Sanyassa, The Wraiths War Council members gave us details of the certain happenings as of late."

After a few seconds, the emblem of the infamous Wraith Mercenary group fades in followed by their slogan - "Owning Tomorrow By Kicking Ass Today.”

The smoke and emblem fade out and show three members in a very military, Spartan style office. The office is gray and ridden with charts, various gear, and stacks of plans. At the desk sits the Wraith’s Executive Officer and Jedi Knight, Avid Soyak in his loose cloak, hiding God knows what underneath. Behind Avid stands two solemn figures, the dual enforcers of the Wraiths – Praetor Sato Hachitori and Archon Aries Omega. Sato stands grim faced to the right, his Devaronian features covered with cyborg and metal plating enhancements. To the left stands Aries, covered head to toe in a life sustaining set of Vacuum body armor, hiding him completely underneath.

Legatus Soyak begins to speak: "The current situation in the Moddell Sector has finally come back to normal. Recently, attempts at sedition and espionage have been foiled. Two new recruits to the Wraith Mercenaries have tried to siphon information of our plans, strategies, military might, and secrets to buyers on the black market. The two recruits were easily spotted and their plans quickly foiled. With the very loyal and dedicated help of the two officers behind me and Wraith Mercenary Myles Kalabarn, the recruits were immediately hunted down and arrested. The one former recruit, a Recarn Vorse, after a quick arrest by Maior Kalabarn and grueling interrogation, admitted to everything he was charged with told us everything we wanted to know. Along with this information, Vorse revealed the name of his accomplice and the man who put him up to the task - Sol Marx. Recarn was given lesser charges including dishonorable discharge from our organization and stranded on a desert planet, never to comeback to the Moddell Sector. If he does, he will simply be killed. Sol Marx is still undergoing sentencing and torture for information and his outcome is yet to be determined. He remains in the hands of Myles, until we have all that suffices.

Avid grabs a piece of paper and is whispered something by one of the Praetors." Also a recent graduate of our Academy is being tracked down and wanted on charges of Treason, Leaving Mission Parameters, and Insubordination. Along with those are added Attempted Grand Theft-Capital, and Desertion in face of the enemy. As we have come to find out, a death threat to a former Imperial officer as a subordinate, which I personally don’t care much about, and a kidnapping threat of Hapan Royalty was also professed by this foul creature. With our recent diplomacy extended towards the Hapan Royal family and their constituents, we started to look into the matter immediately.” Avid paused to let the severity of the crimes sink into the audience. “ The person in question is a Krythan Rogers, and as of this time we are placing a bounty on his head. He was last seen rim ward of the Glythe sector. The bounty, seeing that money is of no concern to some, will be made of raw material piles of Rogers, and a wonderful load of jewels, found aboard the Carrack he tried to take for his own uses. Though the Wraiths usually prefer to take care of our own, we are too busy to deal with the manners of one such as him. Contact the Wraiths for further information on the bounty."

A reporter sticks out his microphone and asks Praetor Omega a question." What has been your thoughts on this whole situation involving inside members trying to sell information which would put many of your members at risk or overthrow your High Command?"

Aries remains standing where he is for a moment, the noise of the suit discharging breathes are the only sound." My thoughts on the matter are simple. If anyone, even if it is one of our own, tries to put my men, our way of life, or our officers at an risk is a traitor and will be hunted down..." Obviously adding extreme hatred and anger in the tone emitting from his helmet..." No alibi exists for a person trying to betray his benefactors. Yes we are mercenaries and we work for the highest bidder, but we do our business in an honorable way. The Wraiths work for only the price of repairing our equipment and fuel. People hire us, pay us, and we go off and do the job. We do not steal classified information behind someone's back and sell it like a coward. Our security and intelligence programs have always been flawless and our eyes have always and will continue to be on the look out for spies and infiltrators." Aries continues to stand where he is, arms crossed and looks over at his fellow Praetor Sato and nods once at him.

The reporter makes an appearance again, reaching a microphone out to Praetor Hachitori. "And your thoughts, Praetor? Traitors in you midst and your people couldn’t catch…"

"Silence." Sato’s head is bowed as he speaks. Aries sighs in the corner, knowing the reporter has pushed the wrong buttons with his partner." Speak another word and I will slit you ear to ear for the galaxy to see. Listen when I speak, and learn from my words, and perhaps you will live to see your ship again." He turns to face the camera again, speaking to it this time." These traitors and gutless spies will be dealt with in due time. There are those out there who seek to deface and discredit our organization, and they will be brought to justice. Know this: any person who comes into our space and comes after our people, my Brothers, will be swiftly struck down. You will taste the blade and the blaster, and you will feel the vengeance of the most elite mercenary organization in the galaxy – The Wraiths.

The reporter is very set back and shaken after the intimidating and angered views of the two standing officers and their display of unflinching loyalty and giving their present Legatus full support. The camera turns and centers on Avid Soyak and waits for him to speak. Avid puts his hands together on his desk and looks directly into the camera.

" This is the support and mentality throughout our entire Mercenary organization. We have been in the shadows growing stronger everyday, and even though due to the two disruptions we have had lately we continue to grow. We are an organization who has stood the test of time and pay its dues to have a place in this Galaxy. And we will continue to be here...right down to the very end." Avid shows his first signs of emotions throughout the interview in his last sentence, stressing the fact that The Wraiths will continue on forever. The camera clicks off black and again the Wraith logo fades in. 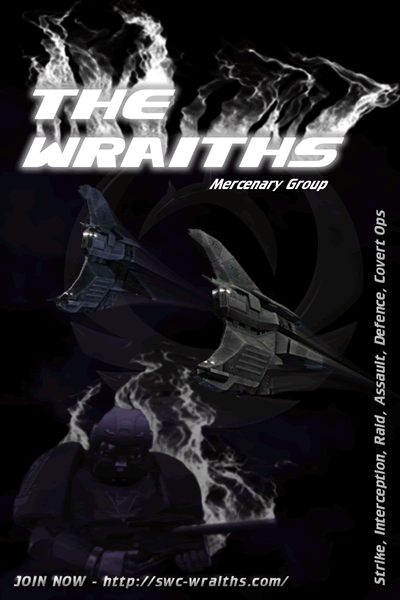 Retrieved from "https://compedia.fandom.com/wiki/Conspiracy%27s_Rise_and_Fall_-_Year_7_Day_226?oldid=2665"
Community content is available under CC-BY-SA unless otherwise noted.