Edit
watch 01:36
We're Getting Mutants in the MCU - The Loop
Do you like this video?
Play Sound

Alexo was the first son and only son of republic colonists who along with many moved to Thyferra to be part of the so called Bacta rush. As with most colonists children Alexo was schooled in typical Republic then as the political situation change Imperial tradition. As Alexo grew his parents continued in the Bacta trade and by playing along with the new imperial regime made the way up the class ladder in no time the only concession that was made was that Alexo was pre-registered for Imperial Military Service.

Having spent all of his life in the shadow of medical production the future of Alexo's military placement was set, field medic. To train as a field medic in the Imperial Army there are two distinct paths. The first was to go through basic training and there show an aptitude to medical understanding. The second was for those with more connections it involved a education from one of the many imperial friendly universities, academies, or institutes for a higher education then a quick commission in to the army. As a soon to be Imperial medic the academy of choice was The Byblos Academy of Medicine. The departure from Thyferra was one of the proudest moment for Alexo's parents their son was joining the empire and would if all things worked as planned would be the first officer in their family. This placement would promise future ties with the new regime. For Alexo this was a step forward it would give him all he needed to start his own life he could live a much more exciting life with the empire footing the bill for all of it. Being a medic also meant chances were that Alexo would not be the usual cannon fodder that the Imperial army employed. Life on Byblos was different in almost every way from Thyferra. Thyferra was tropical Byblos was cold one had a 22 hour day the other a 38 hour day that on top of a intense load of school work Alexo was having a rough time getting his circadian rhythm back in track but as most university students agreed the years in higher education were tough but then again when you grow there is always a little pain involved.

The years in school was at the end as Alexo held the data card that would give him his first commission in the Imperal army. The holonet transceiver finally connected Alexo with his parents so they could share the moment. The data pad came to life as Alexo slid the card in and its screen read, Imperial medic on assignment with the Coruscant Guards and the Coruscant Security Force seeing as both shared medical facilities and would neither should be seeing much need for major medical attention. Alexo was thrilled he was going to the core the heart of the empire to work he was to report almost two months after graduation. Alexo spent the last few days with the other medics he had trained with preparing for the graduation ceremony. The graduation was the same as many before it Alexo was the second to last being the salutatorian of the class but it was worth it to go through the motion knowing that being in Coruscant was almost a promise to make it ahead in the army much better than some outpost in the outer rim.

After graduation Alexo went home for a week to spend time with the family during which he was treated like a king his parents were pushing him on everyone they wanted to impress after a week of this Alexo was ready to leave again. Alexo went to scope out his new place of work he didn't care to go into the commanders office because he was still not expected for few weeks. Alexo found a nice place to stay near the palace and enjoyed the activities that were to be had in the upper levels of Coruscant. On his way home one night from a nice dinner and a show Alexo watched as a group of people rushed into a speederbus terminal with a squad of stormtroopers in pursuit. After a few seconds a explosion rocked the ground as flames rushed out of the terminal Alexo knew what he had to do. While running to the terminal Alexo grabbed the hyposprayer and laser cauterizer from out of his medpac. Once on scene Alexo started to triage what he could most of the people were not going to make it but there was nothing he could do but for those who he could help Alexo worked without care for who they were. The Coruscant security force arrived in good time but they did not come to help those injured but to arrested anyone on site thinking they would be able to arrest someone who was the "cause" of this bombing. Alexo was just a face in the crowd and he was helping possible suspects as the cuffs were put on with force Alexo's explanation fell on deaf ears.

After the arrest Alexo was thrown into a cell in the CSF prison where he waited for someone to have time to interview him and take a statement. Alexo waited for two days before he was interviewed the question that seem to come up again and again was "Why if he was an Imperial medic then why was he helping the enemy" this question was just ahead in repetition of "Why did you not report to your commander when you arrived." Alexo knew this was going to be a dark spot on his service record but there was little he could do about it now. It took another three days to confirm his story and status of Imperial medic Captain. When Alexo was released he was turned over directly to his commander who before asking for any explanation dropped Alexo down to the rank of Lieutenant. It had been a rough week for Alexo to say the least but now he could get to work and try to make his way back into the good graces of his superiors. Time continued to go by Alexo treated the multitude of wounded CSF and Courscant guards that came through the doors he also watched as he was passed over at every point of advancement by far inferior medics knowing full well that his action in the terminal had forever ruined his chances. 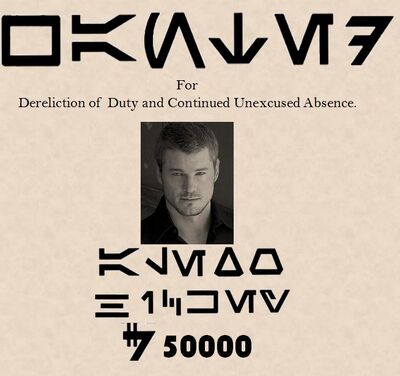 Alexo desertion from the empire had been brought on from the fact that he was tired of all the imperial ignorance. From looking over him just for a night where his oath "To seek out the weak and injured." To the blatant disregard for anyone who was not in imperial uniform or was one of the so called friends of the Empire. The news spoke almost constantly of people living on the lower levels who were in need of medical supplies to survive and yet any time Alexo spoke with his supervisor the answer was no. After many nights of thinking about his future Alexo packed his things and borrowed enough medical supplies to fill a small repulsor sled and left the service of the empire forever. Before leaving Courscant Alexo decided that with his career gone already it couldn't hurt so Alexo took his newly acquired medical supplies to the lower level. Knowing the CSF on a very personal level Alexo would only have a few hours before his travel status was revoked and the CSF would come looking for him so he did as much as he could to train some of the people in the under city before he made his way to a civilian transport back to Thyferra. Once home Alexo found out that his parents were more upset with his desertion than the empire could ever be this made his stop on Thyferra was a quick one to say the least. As Alexo boarded a Gallofree Medium Transport and headed away from his home he left everything he had ever know. As the shuttle traveled Alexo wallowed in his own pity think about how much he was losing but after a while he realized that in all of his life he had done almost nothing for others. With this new thought Alexo realized he had to do something more with his life he needed to help people not just try to help himself and with his actions on Coruscant he was on the right track.

The shuttle Alexo had chosen was the cheapest he could find and it ended up taking him to Naboo a good planet to stat a new life on but there were some things he would need before he could be a blessing and not a burden the majority of which he could solve with a good job. looking around the starport it was easy to see that there were plenty of ships but not enough pilots so Alexo decided to give flying a try. It was not long and Alexo was working for the Akheton Transport Services, a member of the Akheton Corporation, flying from one end of the galaxy to the other.

"Medics bring light to the darkest of all situations."

Community content is available under CC-BY-SA unless otherwise noted.
Advertisement