Alexanderr N`Corr is second-in-command of the Triumvirate Coalition Logistics Department, an ex-Chairman for the TC Senate and a prize-winning racer widely known throughout Teraab. He holds the rank of Chief Administrator.


Alex is a 20-year-old Human, with a light skin tone and very slim body build. His medium-length hair and almost unnoticeable beard are brown. He has very dark eyes, usually bloodshot, with dark rings around them. He wears tattoos on his left forearm and around his right clavicle.


He is usually seen wearing either baggy, comfortable clothes or his TC uniform with bronze XO lapels. 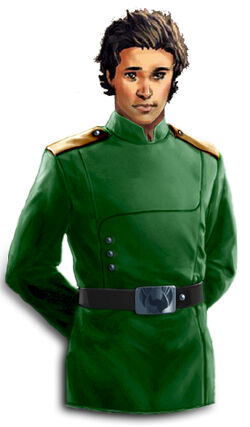 Alex was born in the city of Doaba Guerfel on Corellia. The city, located in the arms of the Nomad Mountains, was famous for its elitism. For young N`Corr it had as many pros as cons. Son of Gregory and Joanna N`Corr, who owned a big industrial company, Alex had everything he could dream of, with the exception of honest happiness. His unstable family situation influenced the young boy's psyche, and he developed a restless attitude toward other people. Most of his childhood he was considered funny, entertaining and well-mannered, with many friends surrounding him, but he was still calm and a bit alienated. The birth of his beloved sister, Natalie, did not help the family situation. He knew that even though he felt responsible for the sibling 10 years his junior, there was not much he could do about bringing her up. 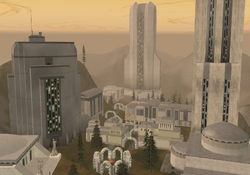 As the boy grew older, his parents passed many responsibilities onto his shoulders. Paradoxically, Alex found it not only entertaining, but it also helped him evolve mentally. He matured very early - at the age of 17 he had already been working for his father, supervising production and trade, and taking personal care of payments, deliveries and contact with customers. That is also when the young man developed his passion for flying. He used to pilot big freighters on jobs, and fast, dangerous speeders at night, racing illegally with friends.
His unusual intelligence allowed him to remain a good, hard-working student at school and at work. Even though he always had good grades, he found the methods of his teachers - and some of the teachers themselves - purely despicable. That caused many conflicts, which could have ended up with Alex being expelled. Thankfully that never happened, and Alex was free to finish the obligatory education.
On a private note, Alex was involved in a few (usually complicated) relationships in his younger life, but after getting through a rough time a couple of times, he decided to stay calm and reasonable when it came to women and friends. Yet he remained fond of good entertainment, always surrounded by people, partying often and enjoying the bright side of being young.

After some time, he tired of having everything given to him by his family, including his job. He knew he was doing his best, but that was not enough for the young man. He decided to do something by himself and go off on his own. This was not easy on Corellia. The planet, as well as the whole system, was under jurisdiction of the evil Galactic Empire, toward which Alex developed a hatred over the years. No matter how grim the man was and how dumb and annoying he might find the people around him, he had always been a good person inside. Seeing the harm done to the people of Corellia by the Empire, he had sworn to himself he would never fraternize with the Empire. He knew he had to leave. 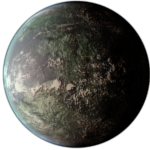 One day he received a holo-message from a faction of average fame - the Triumvirate Coalition. He did not know much about the TC, but he knew two things: It stood against the Empire, and it had vacancies. He accepted the job offer that he - and many of his peers - received, said goodbye to his family and friends, with whom he promised to stay in touch, and left Corellia by public space transport. Young N`Corr finished his travel on Tattooine in the Orus sector, where he was picked up by a Coalition officers. A new destination lay ahead: Pesmenben!

The first couple of days at TAS Aryan training station in TC space were harder than Alex had expected. Yet he enjoyed the lessons given to him by the teachers of the Triumvirate Academy. He passed all the exams under the watchful eye of Victor Lima, and the time came to choose his career path.
Of all given possibilities, Alex especially liked the offer from the Logistics Department. Let's keep in mind that he did logistical jobs earlier in his life, so he knew he would enjoy himself and would be an asset to his superiors and to the faction as a whole. He also enjoyed the atmosphere of the department that Victor told him about.
"They are famous for drinking?" Alex thought, opening a bottle of beer with his blaster's handle. "I will surely feel at home."
Working under the supervision of his CO, Dero Racto, and XO, Kerveros Nightstalker, Alex labored hard, shinning up the corporate ladder. He visited many interesting places around the Galaxy, picking up recruits, ships and equipment. Soon, his hard work had been noticed, and Dero offered him a job on the building team. Learning and doing construction on the planet Pesmenben III widened Alex's horizons and increased his skills. The hefty and quite satisfactory salary he was earning allowed him to buy ships, vehicles and items for himself. Living a busy but happy life among the many great people of the TC, little did he know what the future was about to bring.
When Dero Racto was moved from Logistics to Triumvirate Space Technologies and made its leader, his XO, Kerveros, remained in charge of the department. Not for long, though. She soon left the faction, leaving Alex's crewmate Marco Sands responsible for taking care of Logistics. Marco was soon appointed commanding officer. Alex, even though he knew he was one of the veterans in the Department by then, had not expected what he heard from Marco via holo-message one evening. With his jaw on his floor, but also with great joy and appreciation for the recognition, Alex accepted the offer to become second-in-command of the department.
Responsible for supervising the transport of builders and part of the construction team, Alex has helped finish two important building projects, on Istic III and Zor Vlahu. Both at the building site and in his office, Alex has worked hard to make his department the best Logistics service in the Galaxy, in close cooperation with his boss and good friend Marco Sands and with the help of the wonderful and incredibly hard-working Supervisory Officer (3IC) Lhornic Dappuratt.
After many promotions, Alex now holds the rank of Chief Administrator - the highest possible rank for his position - and is as happy with his life as he has ever been.

For a man who has always been a fan of speeder racing, how could Alex resist starting in the Triumvirate Cup when the tournament was announced? The first race was both incredibly fun and unlucky for N`Corr. He lost by only 2 minutes to the winner, Aurelian Wynterlake. Silver is not bad, but it is still silver.
After some time, another tournament began, and the man finished second again. This time, though, he was lucky to finish with this result, as in the middle of the race he was struck by illness, and medics had to intervene. Thankfully, it turned out to be nothing serious, and Alex received the second silver medal of his racing career.
Before another racing season started, Alex bought the fastest speeder in the Galaxy - the infamous Radon-Ulzer 620C. Alex called his vehicle the "Cold Wind" and was ready to fight for his first gold medal. This time, though, the form of the tournament changed. The pilots were racing for the championship ("TORLIS Championship"). All racers are teamed, and there are separate classifications for the tag-team challenge and the single-racer challenge. Alex has won one of the three races of the championship, and is currently a leader in the single-racer classification. He and his teammate, Marco Sands (as "Sandstorm Racing"), are also in the lead of the team classification, with the "Phoenix Racers" team. More emotions are to come! 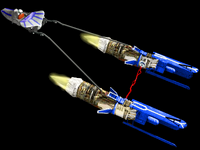 Besides his Logistics duties and racing training, Alexander had accepted the position of Senate Chairman offered to him by the faction's leadership - TC Chambers - and for four months served as a link between Chambers and the Senate, and as the coordinator of the election process as well as the Senate's work. Alex served his term as Chairman during the eighth term in the Senate's history. 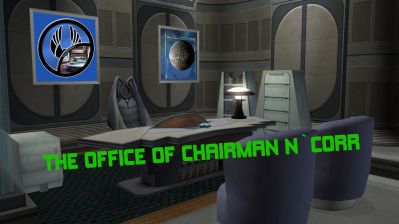 Alex N`Corr has as far been awarded with:

Retrieved from "https://compedia.fandom.com/wiki/Alexanderr_N%60Corr?oldid=21037"
Community content is available under CC-BY-SA unless otherwise noted.